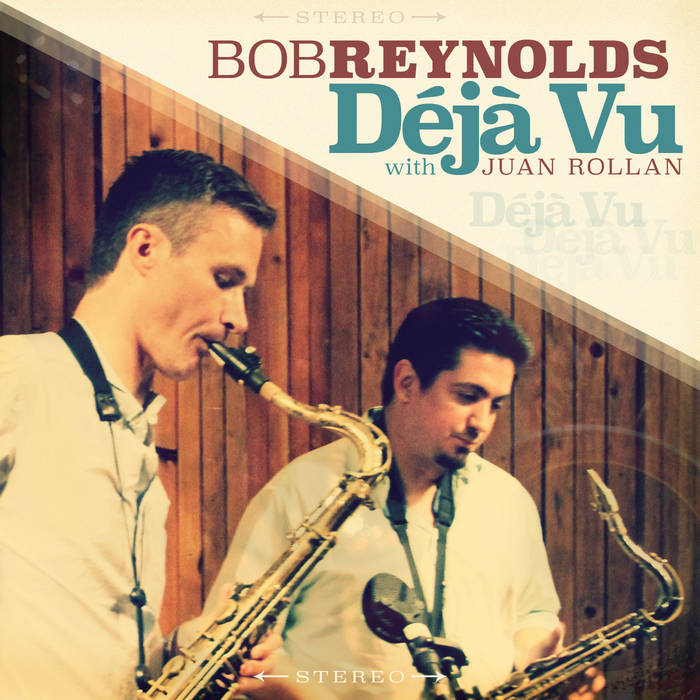 Peter Jones Side A is beautiful - I couldn't pick a favourite from the four. But the opener on Side B is fantastic - funky as anything. At least, that's where I put the A/B split :).

Fantastic playing from all four players - with a couple of nice percussion and bass solos. Favorite track: Living Room Blues.

Stefano Gamba Hey, Bob, great collection of evergreen tunes, but with a unique style! Favorite track: Out Of Nowhere.

Cyndy Roberts Beautiful and Thoughtful straight from the heart! Favorite track: There Is No Greater Love.

Jackson Cotugno Bob and Juan's playing on this is outstanding. They play together like no other two people can. And the rhythm section is killer. Favorite track: Invitation.

SHORT -- Juan and I have been friends for 21+ years. We met in high school, both brand new to the saxophone and playing jazz. This album was about capturing our musical connection. All songs were complete takes recorded free of overdubs. Most songs were first takes. All four players were in a single room.

LONG -- On the day we recorded this album, Juan and I had been friends for 21 years and 11 days.

We met in 1993 as sophomores transferring to Douglas Anderson School of the Arts in Jacksonville, Florida.

I first noticed Juan’s saxophone case on the bus ride to school. Then we bumped into each other in home room, and finally wet met in 1st jazz band, later that day. It was a case of “OK, you’re new. I’m new. We’re both serious about the same thing. Let’s be friends.”

That kicked off 3 years of carpool listening sessions, and weekend jams in Juan’s living room.

We'd play-along to Aebersold CDs while Juan's parents watched from the couch.

We discovered ii-V-Is together. Attended our first jam sessions together. Made all-state jazz band together.

Anxious to begin our recording careers, we even booked studio time and hired the best band we could afford.

It was a proud day: We made our first tape.

We went our separate ways for college, and while we always stayed in touch, we saw less and less of each other each year.

Somehow, 15 years went by without us playing together.

Until... this January when Juan visited me in Los Angeles.

We pulled out the old play-alongs and jammed like we’d done 20 years ago.

It was like no time had passed. We still could finish each other’s ideas and sync up like we played together consistently.

I knew we should document this for real.

So I lured Juan back for another visit, booked a studio in Hollywood, and recruited two of my favorite players in town.

The plan was to go in with little structure. Just record some tunes we used to play.

But I had an agenda.

I wanted to capture conversation, not competition.

There’s a rich legacy in jazz of two-tenor recordings.

One kind is the “cutting contest”, where the material tends to be fast and challenging and each player tries to out-do the other.

I was more interested in the “two men talking” kind. My model was Coleman Hawkins Encounters Ben Webster.

Using that “old Hollywood sound” as a reference, we all set up in one room so we could see and hear each other.

One reason new jazz recordings don’t sound like old ones is that modern studios isolate players to allow for editing later. But if you’re not going to edit, why isolate?

I wanted that sound you only get when each player’s instrument bleeds onto all the microphones. I wanted that big room reverb.

I also wanted to capture what came instinctively. So we stuck to first takes and no overdubs.

“Right” would be what happened on the first pass.

And the material? What can I say? Juan and I share an affinity for a broad range of music.

The standards were a perfect vehicle to transport us back to familiar territory.

But of course, I ended up writing a few tunes just days before the session and even arranging one of my favorite Police songs.

We recorded all of it in one day, but the end result was two unique statements. So in the spirit of an old album, I grouped them as SIDE A and SIDE B.

I think you’ll understand why when you listen.

The thing is that to us, all this music exists in the same space. It's all approached with the same diligence and enthusiasm for creating in the moment.

From the swing tunes to the Sting tune, one thing was obvious: this feels familiar, like we’ve been here before.